A breast lift, also called a mastopexy, is a surgery to lift breasts that have gotten droopy.  Now, you can always boost the ‘girls’ with a supportive bra as you get older and leave it at that. However, if your drooping breasts really bother you, then a breast lift may be worthwhile to consider.

The mastopexy is typically a 2- to 3-hour operation. During it, the surgeon removes the excess skin of the droopy breasts, and the nipples and remaining breast tissue are repositioned up the chest where they once were. This might sound fairly straightforward, and the surgery definitely works well, but there is one catch.  One big catch.  You get major scars from this surgery.

The scars from a breast lift vary in length depending on just how droopy you are.  If your droopiness is fairly minimal, sometimes the lift can be done with a scar that just extends circumferentially around your areola (the colored circle around your nipple).

With moderate droopiness, a lollipop scar can be used, where the scar extends circumferentially around your areola but also extends vertically downward to the crease under your breasts.

Severe droopiness often necessitates an ‘anchor’ scar, which is a lollipop scar plus a horizontal scar extending along the crease under your breasts.  These scars can be quite extensive, and they are also permanent. They will never go away.  When you are 85 years old, the scars from your breast lift in your 40s will still be there, albeit likely quite faded. 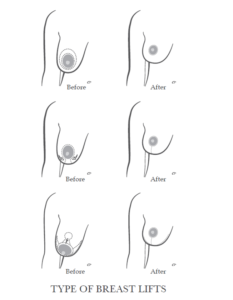 Many women ask me if breast implants can lift their breasts. Unfortunately, implants do not have magical hovering properties. In fact, they do the exact opposite.  Breast implants make your breasts heavier, causing gravity to pull downward on them even more, resulting in your breasts drooping even more quickly.

In other words, breast implants make your breasts larger but don’t lift them.  Breast lifts will lift your breasts but won’t make them bigger.